My blog has moved to a new location! See you there!
Posted by Unknown at 17:14 1 comment:

NFP When There Are Cycle Issues: Still Pro-Woman

Given my personal history, I really don't know why I didn't address this in my previous post.  A comment on that post mentioned using the pill to treat PCOS, which reminded me of how often the pill is prescribed to treat gynaecological problems.  In fact, whenever a discussion of forgoing the pill arises, there are the inevitable comments of "but my doctor prescribed it to treat my x; I need it!"  I encounter this a lot in teaching NFP, actually.
Now, let me begin by stating that I am not a doctor.  I cannot give medical advice and am not intending to do so.
Now that that's been said, let me share my own story.  It is my biggest regret that I allowed my doctor to just prescribe the pill at 17 when I complained of dysmenorrhea, menorraghia, and irregular cycles.  My doctor did perform an ultrasound and test hormone levels, and all was normal.  Narcotic pain medication was tried without success.  So she put me on the pill.  I stayed on it for the next 7 years, trying different formulations and always afraid to consider anything else because I didn't want the pain again.  Even the fact that my cholesterol was high whilst on the pill didn't dissuade me from using it.  I had no other choice, or so I thought.
Then I got married. I encountered the Billings Ovulation Method.  I knew I didn't want to be on the pill if there was an alternative.  During my engagement I'd asked my doctor (a different doctor by that time since I'd moved house) about alternatives, but she didn't want to try something different since the pill was "working".  She also suggested that I omit the sugar pills so I wouldn't have to worry about bleeding at all during my first year of marriage, which honestly freaked me out.  Discouraged, I just pushed the question aside, assuming there wasn't really much I could do.
But the question wouldn't go away, thankfully.  I searched online for alternatives.  I finally broke down and asked my uncle, an OB/GYN, if he knew of an alternative.  He did.  So I went to my doctor (a different one, again) and said I didn't want to take the pill any longer and I'd been told of this alternative medication.  She agreed to let me try it.
That hurdle jumped, I sought out a Billings instructor and been charting.  For some women, it can take a year before fertility begins to return.  I was lucky and started noticing fertile signs within weeks.  When I started charting the mucus, I remembered that I'd noticed that before, before being put on the pill.  In fact, I'd mentioned that to my doctor, who dismissively told me "oh, that's normal" without telling me what it was or what it signified.  Within a month of being off the pill, my body ovulated, and I found the answer to my irregular cycles: I bled at ovulation and menstruation.  This is actually fairly common and is considered a normal variation.
For years I'd thought the pill was helping me by taking care of the pain and heavy bleeding.  In looking back, it wasn't empowering me, but enslaving me.  It suppressed my fertility, and my knowledge of it.  I felt much more empowered once I started charting and could see what my body was doing and why.
Now, there are certainly hormonal conditions that may require hormonal treatments.  I am not saying all hormonal treatments are bad.  But I am saying that all women with concerns or gynaecological problems would benefit from charting to see exactly what is happening, and that hormonal treatments should be used more sparingly than they are. It doesn't strike me as pro-woman to suppress our knowledge of our bodies in this way (though, to be fair, I've found most of my doctors have been unaware of what one can learn from charting, so it would be great if more were trained in this).
Posted by Unknown at 11:41 No comments:

We're in the midst of NFP Awareness Week, and the theme this year is "Pro-Woman, Pro-Man, Pro-Child, Natural Family Planning". I'd like to look at that a little.

Pro-Woman: Believe it or not, saying no to the pill doesn't enslave women, but is pro-woman.  Instead of treating her unique physiology as something to be suppressed or "fixed", NFP recognizes a woman's cyclic fertility as normal and seeks to identify the fertile times accurately.  Where contraception can only be used to try to avoid pregnancy, NFP can be used to postpone or achieve pregnancy, or simply to know your cycles or for health reasons.  It really is amazing what you can learn from a chart. For example, Dr James Brown's and Dr Henry Burger's work showing the close relationship between cervical mucus and hormones means that one can graph the oestrogen, progesterone, LH, and FSH patterns just by seeing a woman's chart. Maybe I'm just a geek, but that's amazing. Women should have this knowledge! Or at the least know they can know that easily enough if they choose to chart.

Charting also provides a more accurate due date than LMP or ultrasound (while ultrasound is useful for dating purposes, it can be off by quite a bit, I assume because of different methods of calculating gestational age; my ultrasounds have always been at least 6 days off).  Having an accurate due date means women are less likely to be induced unnecessarily.  I was irritated during my second pregnancy because the midwife was discussing induction.  The ultrasound had given a date a week ahead of when my chart did, so the midwife thought I was further along than I was. I was very glad when Charlotte was born at 39+6 (according to my chart; the midwife had me at 40+6) so that I didn't have to fight too much.

Now, lest I make this sound like NFP is all rainbows and lollipops, I'll fully admit that it can be difficult and that I can get frustrated with charting at times.  But it is important to remember that charting rigorously isn't always necessary, and charting to avoid is only for when a couple has discerned that they have just cause to do so.  There are also methods that I suppose fall under the NFP umbrella though they aren't necessarily intended to suppress fertility and require no charting, such as ecological breastfeeding. Personally, I feed that way because I find it easy and best for both of us, not to suppress fertility although that is a "side effect".  When a couple do have jut cause to postpone pregnancy, NFP is effective.  While it can be difficult, so is anything that requires sacrifice.  To quote Dumbledore, "we must choose between what is easy and what is right.”

I've written more than I intended on that, so perhaps I will leave discussion of how NFP is pro-man and pro-child for later.

When I teach NFP, Leo goes along with me (and, on rare occasions, one or both of the others also go).  My comments for this is that it shouldn't be a problem to have children be there as a reminder that it's natural family planning, not natural how-to-avoid-ever-having-a-family planning.  My friend said I need to use that line, so I think I will.

Really, though, I was thinking about how we perceive NFP.  When I told a mother of five that I teach NFP, she laughed that she obviously wasn't good at family planning.  But such a statement assumes that the right kind of planning means planning on not having children.  Isn't that rather backwards?

When we talk about the methods of NFP, a lot focus on "effectiveness".  Effectiveness at what? At avoiding children, of course! While it is good that modern methods of NFP are effective in that way for when it is needed, focusing on that aspect alone I think gets it backwards.

And when I teach couples coming to me for their required NFP instruction during their engagement, I find myself needing to be reminded that it is used for conceiving as well.  All too often, the default mode seems to be one of avoiding pregnancy, when we aren't to use NFP for that purpose without a just cause.  Such just causes haven't been defined (wisely), so I cannot assume a couple's reasons, but neither should I approach their instruction under the assumption that they will be avoiding.  With the limited time for instruction, this seems to be what happens, but being aware of this hopefully I can amend my approach.  I should simply discuss how it is a tool, a tool that provides information on a couple's fertility and allows them to make decisions accordingly.  Even I sometimes need the reminder that "it's natural family planning, not natural how-to-avoid-ever-having-a-family planning".


After a week off, I was back to blogging this past week. I hope you enjoy the posts, and be sure to visit RAnn's for the full carnival.

I feel I'm really making progress on this blanket! Because I hate sewing it up and working in ends, I'm doing that as I go. If I make another, I'll make five vertical strips and then graft them together when I pick up the side stitches, I think. 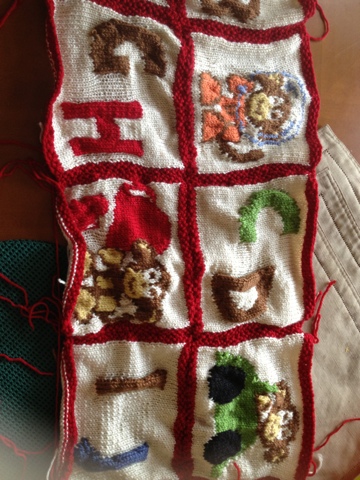 Sometimes, though, these averages are then taken as being some magic numbers for when these things should be done. When this happens, the fact that these numbers are averages, meaning that there were babies on either side of that number, is often ignored.  Instead of just giving a general comparison benchmark, it becomes a ruler by which a child must be measured and declared advanced, average, or behind.  To an extent this can be done well, such as if a child isn't just an outlier, but off the chart in one direction or another, but if it doesn't allow for variation, it is flawed.

At the infant stage this is perhaps most evident in the benchmarks for starting solids.  With the exception of BLW literature, most things I've seen have had a specific age at which solids should be introduced without considering developmental readiness.  The guidelines vary, but the idea of some specific age being ideal is usually present.  This becomes obvious at well checks, when parents are asked about solids but aren't asked about the child showing signs of developmental readiness in most cases. I do realise time is short at such appointments, but it doesn't take that long to quickly go over the signs of readiness instead of just saying "start solids at x months".

I suppose my point is that such charts of averages are helpful for the purpose of comparison, but they shouldn't be taken to mean there's some magic number for when a child should do x, y, or z.

My patron Saint for the year